NASA spacecraft to collide a small moonlet in 2022

By Akshada Patil
June 3, 2020
Science
Defence technique DART will intercept target when the asteroid will be within 11 million km of Earth | Photo from Nasa/JPL-Caltech

National Aeronautics and Space Administration (Nasa) is planning to launch a spacecraft aboard a SpaceX Falcon 9 rocket that will hit a small moonlet in the binary asteroid system Didymos in September 2022.

You must be wondering what on Earth is a binary asteroid system.

A moonlet is a small moon whereas a binary asteroid system is a system of two asteroids orbiting their common barycentre.

Thinking what is a barycentre?

The barycentre is the centre of mass of two or more bodies that are orbiting each other which is the point around which they both orbit.

Now let’s come back to the blast equation again.

A spacecraft will hit a small moonlet in the binary asteroid system Didymos in September 2022.

NOW DARTS HOW YOU HIT AN ASTEROID

The Double Asteroid Redirection Test (DART) — Nasa’s first mission to demonstrate a planetary defence technique — is scheduled to be launched in mid-2021, the US space agency said on Monday. By using solar electric propulsion, DART will intercept the target when the asteroid will be within 11 million km of Earth.

“The asteroid poses no threat to Earth and is an ideal test target,” Nasa said.

To navigate the DART spacecraft to its intended target — a binary asteroid that consists of a small moon (Didymos B) orbiting a larger body (Didymos A) — scientists need to understand how the system behaves.

Scientists have been making efforts to observe Didymos from Earth since 2015, and now, an international campaign coordinated by Northern Arizona University’s Cristina Thomas is making critical observations using powerful telescopes worldwide to understand the state of the asteroid system before DART reaches it. 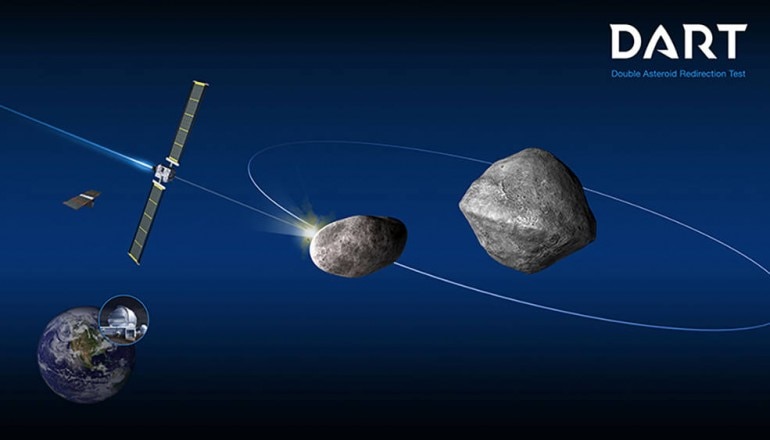 Current observations will help researchers to better understand the extent of the impact made when DART slams into its target — Didymos B — in September 2022, Nasa said.

“The Didymos system is too small and too far to be seen as anything more than a point of light, but we can get the data we need by measuring the brightness of that point of light, which changes as Didymos A rotates and Didymos B orbits,” Andy Rivkin, a co-lead of the investigation team, said.

The investigation team will observe Didymos again from late 2020 into the spring of 2021. Final ground-based observations will occur as the spacecraft travels toward the asteroid, as well as after impact occurs.

The total cost for Nasa to launch DART is approximately $69 million, which includes the launch service and other mission-related costs.

There is no scientific evidence of any alternative cure for COVID-19, even as vaccines are being tested by many countries.
Read more

This is as per a letter written as internal communication by ICMR to Bharat Biotech asking for fast-tracking of the indigenous...
Read more
Science

SpaceX closes in on human spaceflight with this weekend's debut of a new capsule designed for astronauts. The six-day test flight will be real in...
Read more
Science

Vlastimil Gular's life took an unwelcome turn a year ago: minor surgery on his vocal cords revealed throat cancer, which led to the loss...
Read more